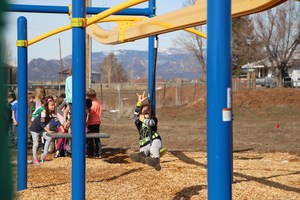 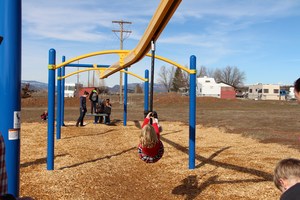 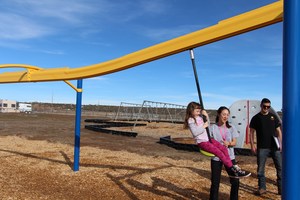 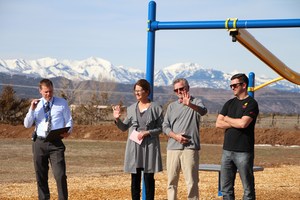 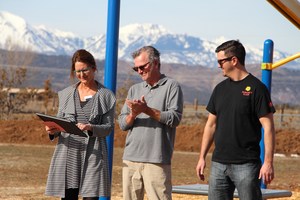 On Thursday, February 9th Sunnyside Elementary welcomed the family of the late Jeff Kuss, a Blue Angels pilot, to the dedication of the school's zipline and buddy bench. These new playground features have been dedicated to the memory of Jeff Kuss, who attended Sunnyside Elementary. Principal Patrick Hyatt encouraged students to chase their dreams as Jeff did, saying of the zipline, "Jeff flew, now you students can also fly." Principal Hyatt also presented Jeff' parent's Michael and Janet, and brother Eric with a Bulldog Proud award in recognition Jeff's life and achievements.
In spring of 2016, Sunnyside Elementary was awarded a GOCO grant to revitalize their playground. In partnership iwth the City of Durango and the Sunnyside Independent Parent Teacher Association the new playground has now been realized. The grant was used to redevelop the grounds, installing an outdoor classroom, shade structures, a music garden, and new playground equipment. The students at Sunnyside also fundraised $8,000 for the program and contributed to the designs of the new playground- which includes a zipline!
On November 15th, Principal Patrick Hyatt officially opened the playgrounds to the students. The zipline continues to be one of the more popular parts of the playground, with shrieks of joy, laughter, and even longlines reminiscent of Disneyland.