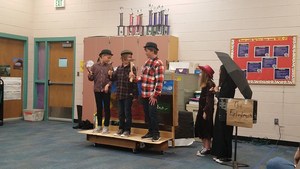 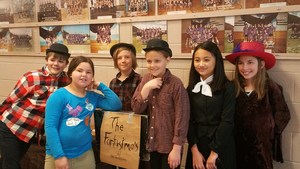 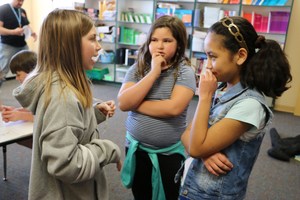 If there is one thing that stands out more than any other when you meet the Fortissimo! team from Sunnyside Elementary, it’s their teamwork. The Destination Imagination team made up of Sam Yeargen, Laulani Wheeler, Sarisma Magar, Andrew Pickett, Anna Padgett, and McKenzie Hayden work so well together they can finish each other’s sentences. It’s this spirit of comradery and collaboration that helped qualify the team for the state competition with their third place finish at regionals.
Destination Imagination teams compete in one out of the six challenge subject areas: service learning, technical challenge, engineering, fine arts, or the improvisational challenge. To decide which area they wanted to participate in, the Fortissimo! team discussed what challenge would work best for the team. Since they knew they wanted to write songs and to explore set design, the group chose to compete in the fine arts based challenge “Change of Tune” where they would have to write and perform a two-act musical.
One element of their challenge was to showcase a change of plans through a set change. The Sunnyside team knew they wanted to create a Durango-based play, so they tackled the challenge by taking the audience time travelling from the 1800s and the construction of the Strater Hotel to the present day.
“Some people believe that the Strater is haunted, so we wanted to tell a story about how it became haunted,” said McKenzie.
Sam Yeargen who plays Charlie in “Durango, Then and Now”, comes to untimely demise in act one, and –spoiler alert– returns in act two as ghost who haunts the prominent Durango landmark.
The students playing construction workers building the Strater are not just convincing in their on-stage performances. Their set was so well constructed, that the appraisers (judges) had many questions about the set and whether the team built it on their own. The team was able to explain how they crafted the set and how Team Manager and parent, Chris Yeargen, taught them construction basics and how to use power tools.
While the team thrived at set design, stage presence, and storytelling, they really excelled in the Instant Challenge. This quick challenge takes place in a period of just five to eight minutes. Students have to think quickly, creatively, and use problem solving skills to produce a solution to the challenge. With such a short time frame to arrive at a unique and creative solution, teamwork is crucial.
During a recent practice, team Fortissimo! showed off their teamwork skills to solve a practice Instant Challenge. The team had five minutes to create a postcard from an imaginary vacation, and then a mini play that would solve a problem that occurred during the vacation. The team immediately dove head first into the task, splitting into to groups to work on the post card and play. They decided that they’d been to the Denver Zoo where lemurs stole their hotel key, but they were able to get the keys back and write about their adventure on the postcard to send to a friend back home.
Along with practicing and exercising their creative muscles in anticipation for the state competition in Denver on April 7th, the team is also fundraising for the trip. They are looking to raise a total of $2000 to cover expenses. To support the team, visit https://www.gofundme.com/fortissimo-DI.